The South County Trailway is a paved bicycle and pedestrian path located primarily on right-of-way lands of the former Putnam Division of the New York Central Railroad. The “Old Put,” as it was fondly referred to by commuters, provided freight and passenger service from 1881 to 1958 between the Bronx and Putnam County. Freight service continued to operate sporadically from Elmsford south, with the last freight train making its final run in August 1982.  The Putnam Railway once served 23 stations in Westchester, some of which still stand today. The former Elmsford station is the only remaining station structure along the South County Trailway. It now houses a restaurant. Historic markers have been placed at most of the former station locations. The location map to the left shows the general location of the trailway. Larger scale maps on the reverse side detail the trailway alignment, access points, local roads and nearby parks and facilities.

The Putnam Right-of-Way spans 36.2 linear miles through Westchester County, of which 14.1 miles comprise the South County Trailway, from Eastview south to the New York City border. The remaining 22.1 miles, north of Eastview to Putnam County, is developed as the North County Trailway.  The South County Trailway is one element of the county’s extensive trail system that also includes the Bronx River Pathway, Briarcliff-Peekskill Trailway, and many other planned paths and bike routes along the county’s roadways. For more information, contact Westchester County Parks at (914) 864-PARK, or go to westchestergov.com/parks 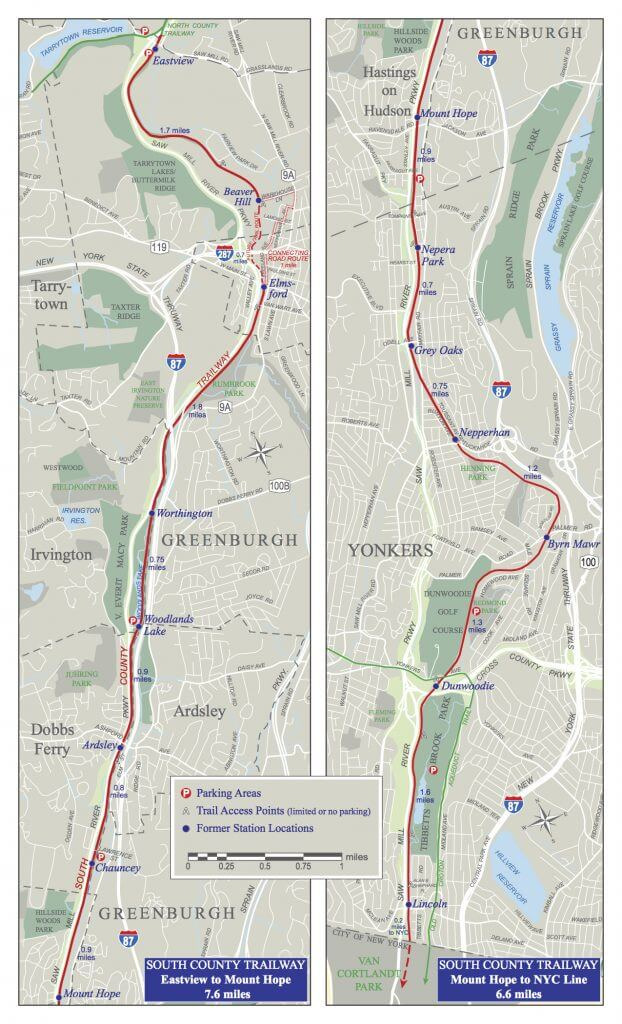