Blue Mountain Reservation is a 1,538-acre park in the northwest section of Westchester County. It was aquired in 1926. It features miles of trails for mountain biking, strolling and nature study, and offers challenging hikes to the tops of two large peaks, Mt. Spitzenberg and Blue Mountain. Also located at the park is the Sportsman Center, a recreation facility offering target ranges. The Blue Mountain Trail Lodge is available for rental by groups and sleeps up to 30 people dormitory-style, and includes showers, a kitchen, and a dining hall with a large fireplace. For information, call (914) 231-4575.

The 12-mile Briarcliff-Peekskill Trailway, an unpaved trail for hiking, is accessible from the Blue Mountain trail system. The park contains a bathhouse and trail lodge, as well as two historically significant comfort stations. These comfort stations were built by the Civilian Conservation Corps and are reminiscent of early 20th century National Park structures.

Blue Mountain was featured as the “Best Hometown Trail” in Bike Magazine’s February 2009 edition. That title sums up nearly all comments and reviews that can be made about Blue Mountain. Area residents are lucky to have such an incredibly varied, well-developed and well-maintained trail network in their backyard. For the uninitiated, Blue Mountain is host to the annual Westchester Mountain Bike Association’s Fat Tire Festival. With many local vendors and cycling companies on hand, it’s a great event to join a group ride and see the immense trail network that Blue Mountain has to offer! 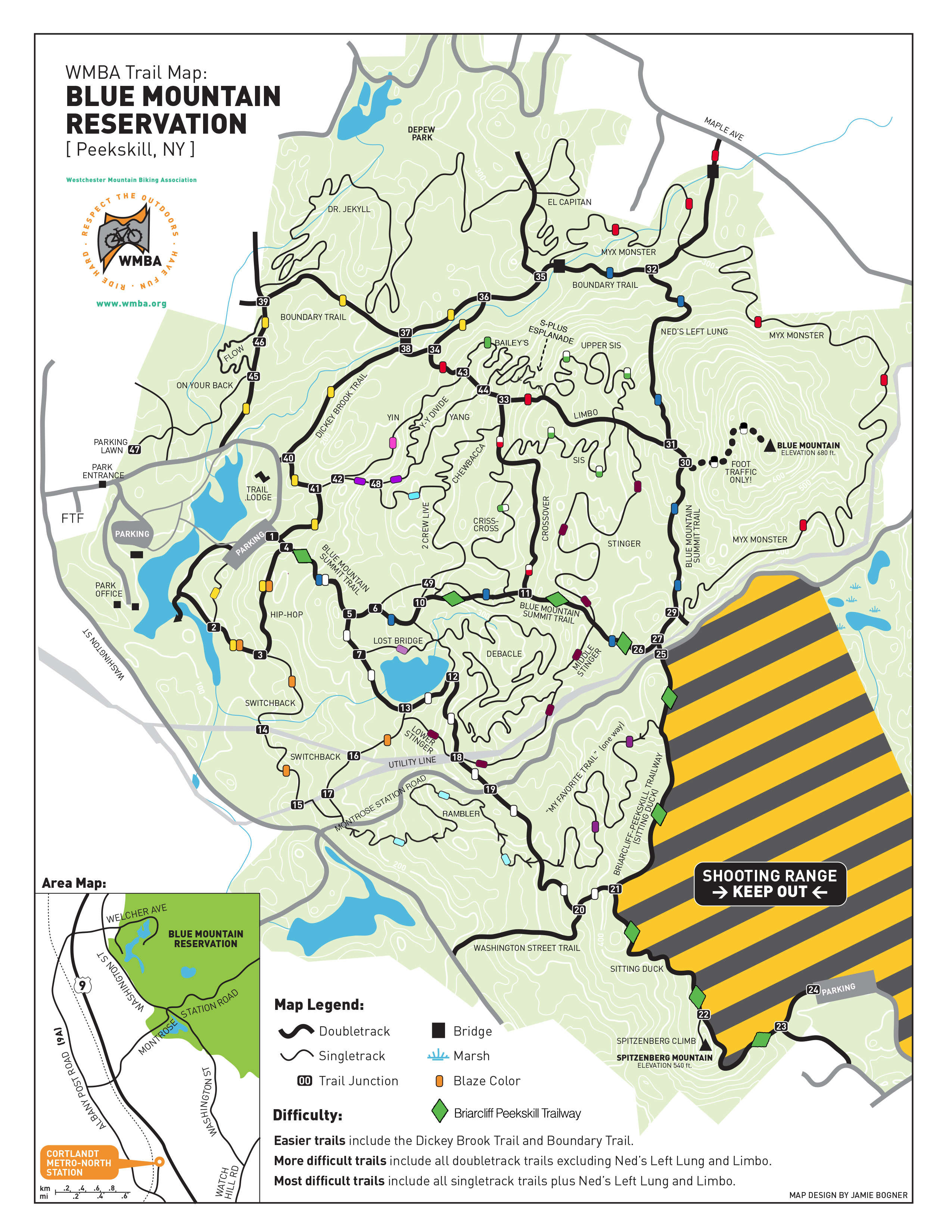 There are so many conceivable loops and rides that can be done at Blue. It’s simply easier to hand out a few good trail and ride pointers. Myx Monster has become the “must ride” trail at the park, however, it offers two vastly different ride experiences based upon direction. Starting from the Blue Mountain Summit Trail near trail marker 29, you’ll get a nice technical climb up along the side of the summit of Blue Mountain. Once you top out, Monster is a fun and techy descent to the back side of the park. Ridden the other direction, starting off at the Boundry Trail just past the wooden bridge near trail marker 35, Monster is a loamy XC trail like many of the outer trails at Blue, but quickly becomes a tough and difficult technical ascent.

The classic original trails Yin, Yang, Upper SIS and SIS all ride great in both directions. Yin tends to get ridden less these days though, and is sometimes significantly more difficult to follow than Yang. The original Y-Y Divide is nearly invisible at this point, however, a new cut has been made in its place, but it’s best to ride from Yang down to Yin. Riding SIS to Upper SIS allows you to easily flow into the unmarked trail that bears off to the right of Upper SIS just before you end up back on Limbo. This trail is a great connector between Upper SIS and the Bailey’s Loop, and is perhaps one of the best new additions to the park in years. It is a one-way trail though, and should only be ridden from Upper SIS to Bailey’s.

Moving to the front side of the park, Stinger (Upper, Middle and Lower) is another 2-faced trail. Ridden in progression from Upper to Lower, Stinger is primarily a descent with some great little climbs, technical switchbacks and fun rollers. The other way around, Stinger is a climb for the first half, albeit a much more manageable one that’s still a lot of fun in comparison to the climb up Myx Monster. The top half is then much more evenly graded and you’ll still get to have fun on some technical switch-backs and rollers.

One of the best “almost hidden” gems of the park is “My Favorite Trail”. Built by the owner of Down Cycles, AJ Picarello, this trail is as you might have guessed – one of his favorite trails. Originally built as a technical cyclocross run, this trail has some great flow for any style of bike and now flows directly into an extension that will take you down to the intersection of Montrose Station Road and Maple Ave. You can easily make a quick climb and then descent back into the park from here either along Switchback or from the “hidden” lake down the Blue Mountain Summit Trail.

Finally, taking “On Your Back” from the lot by the park entrance will bring you back to one of the other great expansions the park saw back in 2005/2006. The Depew Park trails, “Dr. Jekyll” and “El Capitan” are both fun and unique additions. Dr. Jekyll is a fun and long switchback trail that winds through the south side of Depew Park, with lots of technical switchbacks, log crossings and some fun “side of the trail” moves, it’ll spit you out right by the entrance to El Capitan. El Cap’ is best ridden north to south. After some climbs up and over some exposed bedrock features, El Capitan finishes with one of the longest rock rollers and steep descents in the park.